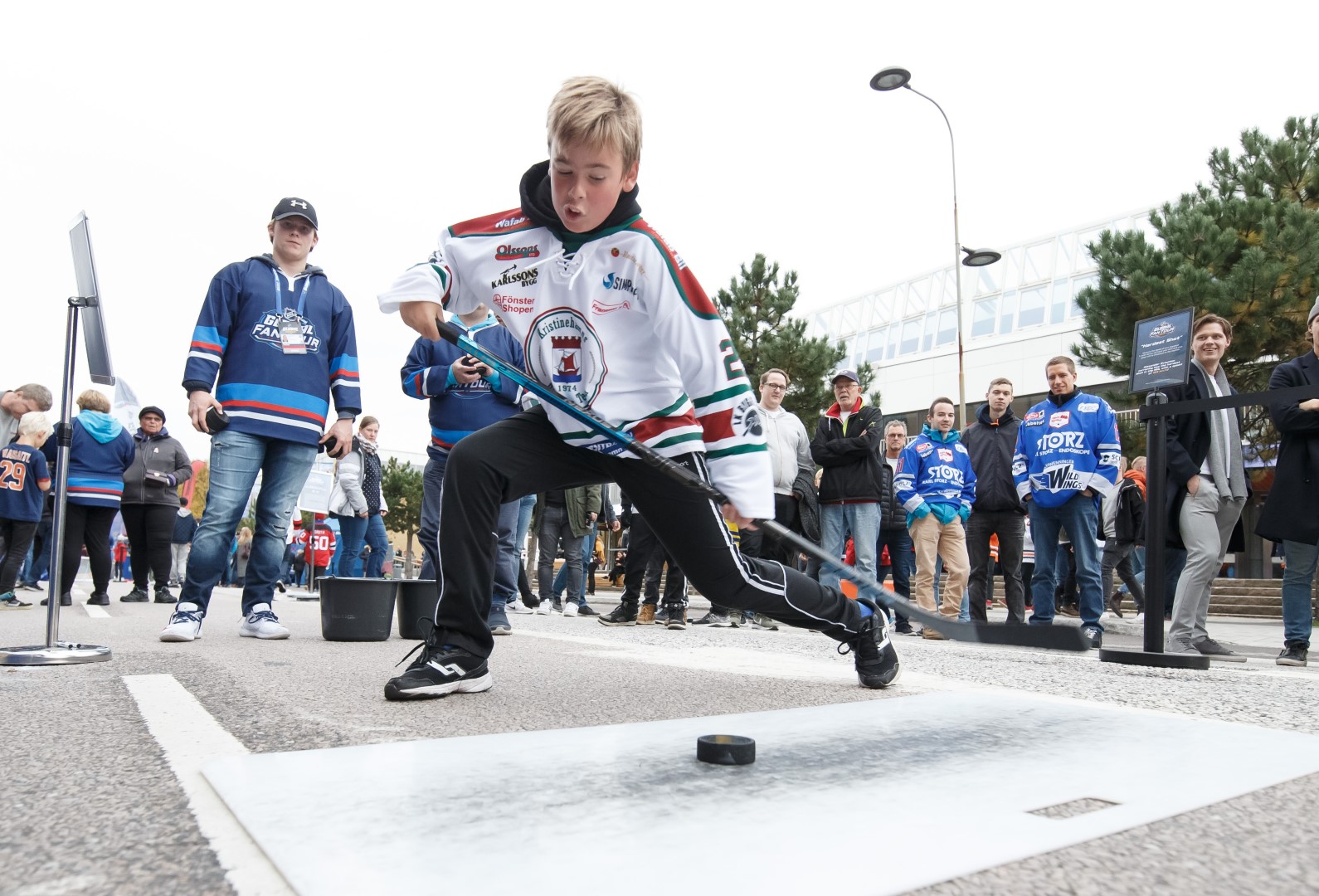 The National Hockey League (NHL) is currently in the midst of the second edition of its Global Fan Tour, an initiative the organisation sees as a key part of efforts to reengage with its European fanbase.

Following five years away, 2019 marks the third consecutive year that the League will play games in Europe, with the Global Series this year taking to Germany, Switzerland, the Czech Republic and Sweden.

Following its launch last year, the Global Fan Tour has also returned, but on a much grander scale. Taking in 10 cities in three countries, the Fan Tour commenced in Dresden, Germany on August 25 and has already visited Lausanne, Switzerland; along with more German stops in Nuremberg and Mannheim.

This week, the Tour will take on a Czech focus with events in České Budějovice (Monday), Brno (Wednesday) and Ostrava (Friday). The roadshow will move on to Plzen (September 23), before a brief return to Germany in Berlin (September 28-29) precedes the final event in Prague on October 3.

“Last year was really a test programme,” Mark Black, NHL vice-president of international operations, told us. “We started out with half a dozen activations that we brought out to people and two 20-foot containers that we retrofitted to create the interactive element. Then we had a couple of stick in hand experiences, allowing people to play the game a little bit. These were a hardest shot and accuracy shooting games.

“This year, based on the success of last year and evaluating what people liked to do, we really wanted to have more of those stick in hand activations, allowing people to experience the game on some level. We added a stick handling competition, which involves moving a puck around to test hand-eye coordination.

“We added long distance accuracy shooting. This is very common at intermissions during games in North America where people try to hit a small opening in a net. Then we created probably what I’m most excited about from my youth which is knee hockey, where small kids are able to play with mini sticks in an enclosed inflatable area. If you’re in North America, certainly Canada, it’s one of the ways in which kids are first introduced to the sport.”

The Global Fan Tour is free to access and has been designed as a complement to the Global Series and Global Series Challenge games involving the Chicago Blackhawks and Philadelphia Flyers. The Blackhawks will face off against German Ice Hockey League (DEL) club Eisbären Berlin in an exhibition game on September 29 at the capital’s Mercedes-Benz Arena.

The Flyers will take on Swiss National League team Lausanne HC in an exhibition game on September 30 at Vaudoise Arena. The Blackhawks and Flyers will then meet in Prague to open their NHL regular season on October 4 at the O2 Arena.

The mobile museum container grants fans the opportunity to sit in a replica of an NHL locker room stall and try on hockey equipment. Courtesy of the Hockey Hall of Fame, participants are also able to view key artefacts from past and present European stars, as well as other items from the sport’s history.

In terms of interactive activations, the Hardest Shot station allows shooters to test the velocity of their slapshot and how it stacks up against some of the NHL’s hardest shots. Fans can also put their finesse to the test in the Accuracy Shooting Challenge, as they attempt to hit a series of stationary targets in the net.

A stickhandling activation station and a long-distance accuracy shooting challenge are also part of the Global Fan Tour, offering fans the opportunity to test their hockey skills. Meanwhile, the interactive Kids Corner offers children the chance to play ball hockey in their own hockey rink and enjoy various hockey-themed colouring books and other items.

In addition, current and former NHL and European players and team mascots will occasionally be on-site to meet fans and take photos. “I think being able to do what we’re doing, going from five cities in 2018 to 10 this year, is in large part due to the great response we’ve had from fans,” Black says.

“We really focus on two different areas when it comes to the fan experience. One is activating around hockey games, which could be a local game or one we’re putting on. Those are catering to existing hockey fans, which of course are really important to us, but we also have activations in city centres where we’re really trying to introduce the sport to people who otherwise may not have the knowledge or the pathway to be introduced to hockey.

“In both these areas, existing hockey fans who know about the NHL are excited to see this because obviously it’s a little harder for them to have this hands-on experience. But we’re just as pleased about the people who maybe don’t know as much about the NHL and how much they embraced the different activations that we’ve had to learn about the game. So, in both these areas we’re keen to build on the momentum of last year.”

The 2019 Global Series is due to conclude with two games between the Buffalo Sabres and Tampa Bay Lightning on November 8-9 at Ericsson Globe in Stockholm, Sweden. To date, Stockholm has not been listed on the Global Fan Tour itinerary, with Black conceding the timing of the games presents a challenge to activate around them.

“We’re still building out the plans for what we’re going to do out in Sweden,” he says. “One of the biggest challenges with what we do with Global Fan Tour is everything is outdoors. The space requirements mean it’s really difficult to do these things inside. Any time you start pushing the window into the fall, and creeping into December, makes outdoor activation challenging and the weather can wreak havoc.

“We’re definitely looking to send some of our activations out there, but our focus is more on development initiatives around those games. So, we do coaching clinics there with local and professional coaches, we run grassroots programmes and we’re working with the Stockholm Minor League Association on an initiative they’re hoping to introduce later this year.”

In terms of the learnings that the NHL took out of the first staging of the Global Fan Tour last year, Black says it is the behind-the-scenes logistical challenges that the League has sought to address for 2019.

“What worked for us last year was the fans being excited about doing things, the ability to try out the sport,” he says. “I wouldn’t say it didn’t particularly work, but in the first year there’s lots of different components that you’re trying to test out. One of the areas that we’ve really worked hard on this year is on the staffing side.

“In North America a lot of people have grown up with the game and it’s not hard to find people you can hire to support what you’re trying to do, whereas in some of the countries, in particular Germany and Switzerland which are developing hockey nations, hockey isn’t at the forefront of the sports agenda so it’s harder to find the educated staff.

“That’s really important to us, so when people come on site they’re learning about the sport and the NHL, and leave having had a good time. We made a concerted effort this year in having somebody who can oversee all the staff, educate them ahead of time and certainly try to find in each of the markets hockey-relevant people who can support in those areas.”

While ice hockey is a hugely popular sport in certain European markets, there remains the fact that staging fan experience activities in the NHL’s heartlands of the US and Canada is a much different proposition than putting on events across multiple countries on one continent.

On how the NHL has sought to tailor the Global Fan Tour experience for the European market when compared to similar events put on back home, Black says: “I think one of the big differences that we face in Europe when compared to North America, and this was something we focused on when we began this Tour, is flexibility.

“In North America, for instance, we did the Centennial Fan Arena in 2017 to mark our 100 years as a league. We went around to each of our NHL cities, and a few other cities in addition, taking 53-foot trailers with us, big activations and a hockey rink with proper boards. The setup was extensive, for which we needed quite a bit of space.

“In Europe, we knew we’d have to tailor this experience to less space, and being a lot more flexible, being able to setup in a day instead of having a few days lead time. So, we knew it would have to be more unique and flexible in terms of being able to adapt to different areas.

“By and large in North America a lot more people know about the sport itself. Certainly, we still have pockets where we’re trying to grow the game, an important component to us, but on the whole, we don’t need to focus on educating as such.

“In European city centres, we’re dealing with people who have never picked up a hockey stick in many cases, maybe have never seen a hockey skate before, so we try and bring in those components so they can get that hands-on experience and for those who wish, they can then get to try it out.”

So, after years away from the international scene, the NHL is again beginning to dip its toes into global waters. The European games over the past three years have also seen the League take exhibition matches to China in 2017 and 2018, with an eye firmly towards Beijing’s staging of the 2022 Winter Olympics.

Black believes the NHL is only “scratching the surface” of what it can do internationally, specifically in Europe, and the Global Fan Tour is set to be a key part of these plans moving forward.

He adds: “For us we did take several years off from playing international games and being involved internationally, so we’re really in the infancy of this project and seeing what works best.”

This exclusive insight into the NHL Global Fan Tour is part of “Fan XP” – a newsletter designed to keep you abreast of the latest innovations, strategies and more regarding fan experience across the globe. To sign up, please click here.