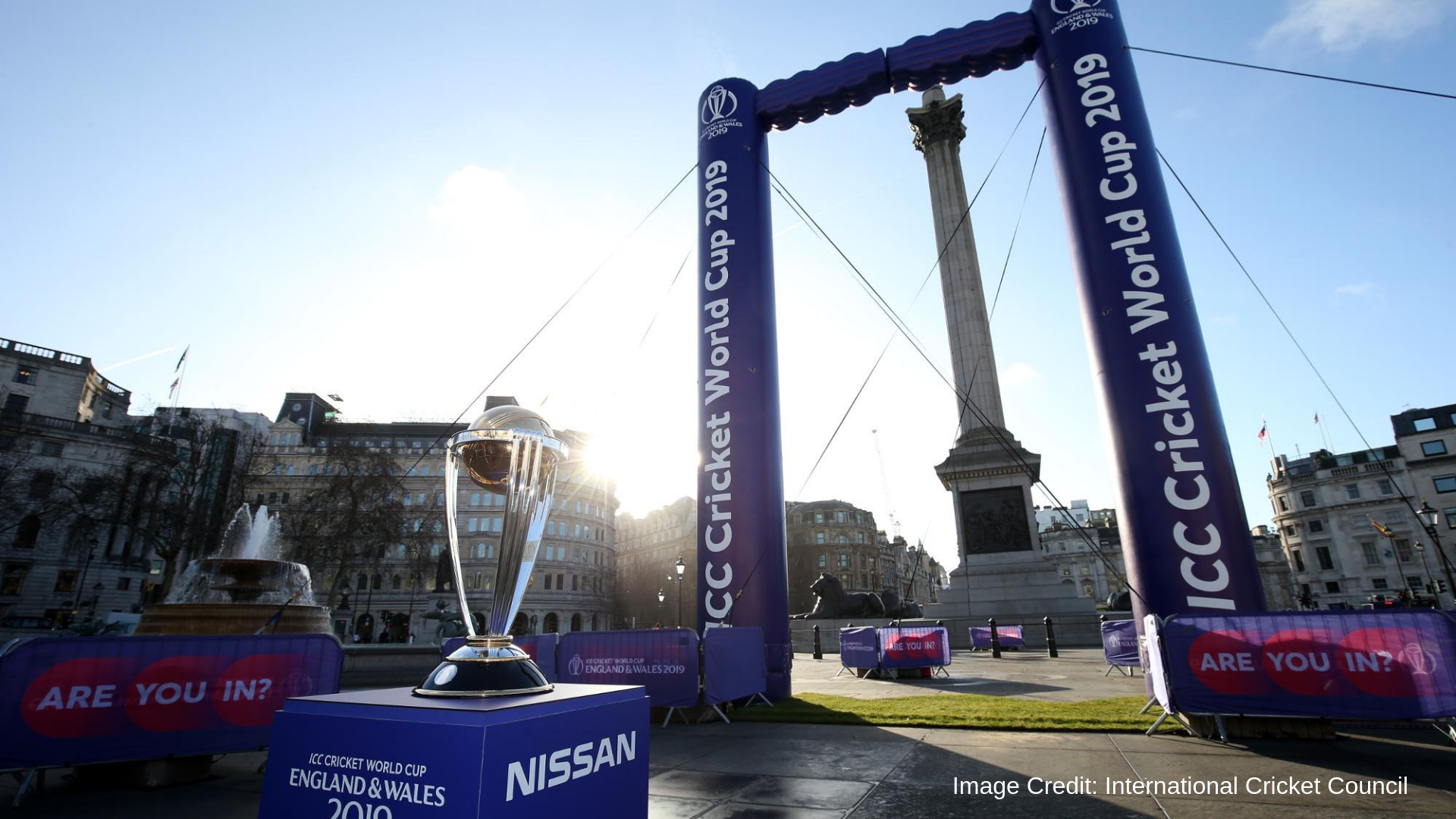 The 2019 Cricket World Cup will commence in England and Wales later this month, with local organisers seeking to harness their fanzone plans to further build on the tournament’s goal of engaging new cricket fans, and not just fervent followers of the sport.

The Oval in London will be the scene for the opening game between England and South Africa on the 30th of May, with all 10 host cities seeking to bring the tournament to life in iconic locations.

The free-to-enter city centre Fanzones will show live tournament fixtures and, along with cricket activities, a range of multi-cultural food, music and entertainment will be on offer.

Meanwhile, Cardiff and Bristol will host special city activations around their World Cup fixtures. Cardiff – in the form of ‘The Ultimate Delivery’ – will attempt a record-breaking catch relay, delivering an official match day ball through the city centre to the Cardiff Wales Stadium for the venue’s opening fixture – New Zealand v Sri Lanka on the 1st of June.

Meanwhile, in Bristol, the local community will be invited to ‘Take Part in Giant Art’ by helping to paint a giant statue featuring flags and emblems of all 10 competing nations, before seeing the structure erected in the city centre for the duration of its World Cup fixtures.

All host cities have played an integral part in the promotion of the tournament, which has contributed to record-breaking ticket sales and mass participation during the Trophy Tour. With around 800,000 tickets available for the tournament, 56 per cent of the buyers have been in the 24- to 44-year-old demographic.

Around 150,000 tickets have been sold to women and girls; and 210,000 ticket-holders – from all age demographics – are completely new to cricket. The Trophy Tour itself has also been truly global in scale.

Commencing in Muscat, Oman on August 28 last year, the World Cup then moved on to four cities in the Americas in September and 14 cities in the Indian subcontinent from September to December.

The trophy rang in the New Year by moving through seven African and 11 Australasian cities in January and February. The tour finally arrived in Europe at the Eiffel Tour in Paris on the 14th of February and first set foot in England when it made it way to London on the 19th of February. It has since worked its way across 60 different UK locations and is due to make its final stop back in the capital on the 19th of May.

With the City Celebrations set to act as the culmination of fan engagement and experience activities, managing director of World Cup 2019, Steve Elworthy, said: “The British public always get behind global events and our City Celebrations allow fans up and down the country, as well as visiting fans, to come together to celebrate the Cricket World Cup, regardless of whether they’re attending a fixture or not.”

Director of city and spectator experience at the World Cup, Paul Smith, added: “The City Celebrations will deliver a real party atmosphere, bringing the cultural melting pot of the UK to a mix of people from all over the world who are there to celebrate their love for cricket in a very relaxed and friendly way.

“The City Celebrations will be the perfect opportunity for each of our host cities to show the world their unique culture and friendly hospitality. These venues will serve as informal and joyful meeting points, from where I am sure fans will take some of their best memories from the amazing event we will host this summer.”

This insight into the Cricket World Cup is part of “Fan XP” – a newsletter designed to keep you abreast of the latest innovations, strategies and more regarding fan experience across the globe. To sign up, please click here.