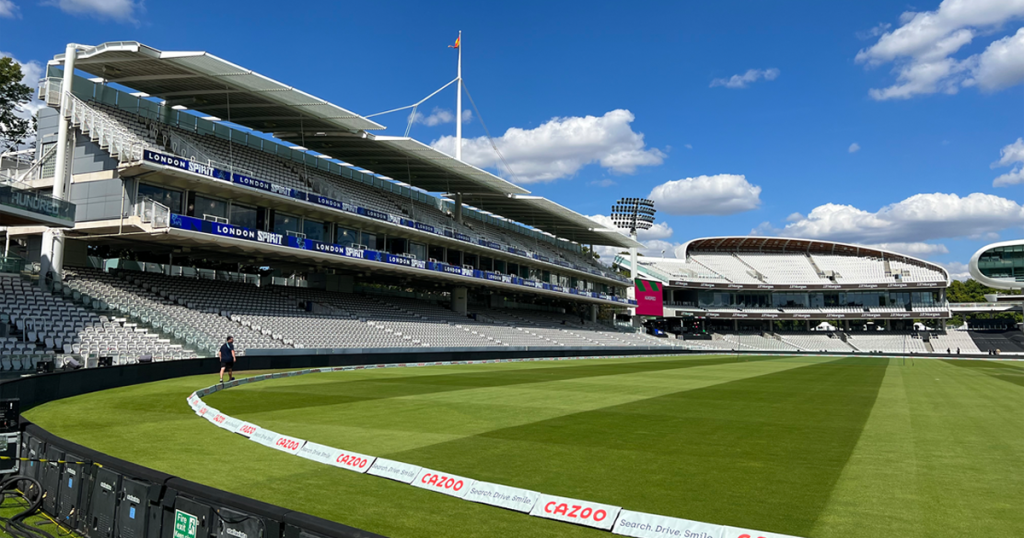 5 Minutes with Lewis and Sarah

Working across all eight venues up and down the country, at CSM Live we delivered branding, venue dressing and exciting cricket-themed activations at this year’s second edition of The Hundred. The tournament was able to build upon the success of last year’s event, inspiring families to get involved in the sport for the first time and enhancing the awareness of the women’s game across the country, resulting in a cumulative attendance of 271,000 across the tournament – a record for a women’s cricket competition.

To find out what went into delivering the event, we took the time to catch up with Lewis Bone – Head of the Cricket team at CSM Live – and Sarah Horkan – Account Director on The Hundred experiential activations – to discuss their role at the tournament, the scope of work they were involved in and the teams they were cheering on during this year’s edition of The Hundred. 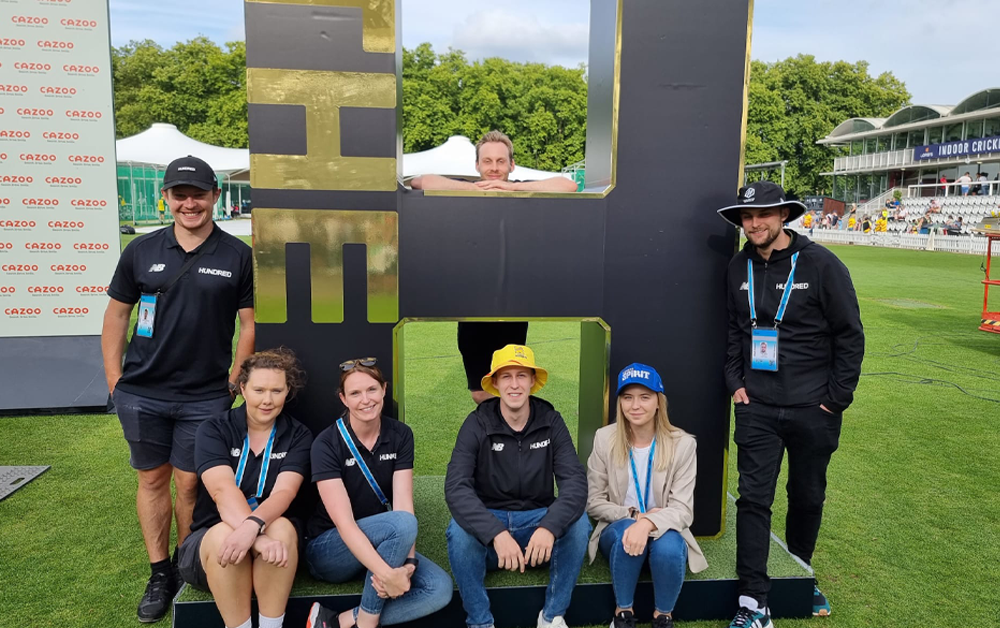 Can you explain what your role was at The Hundred?

Lewis: I lead the cricket team at CSM Live and The Hundred forms about a quarter of the overall season. Along with the Team: James, Nathan, Amy, Ken and special help from Mike McCreadie this year, we installed all the second tier signage at each of the eight venues as well as additional concourse and team specific branding around the venues.

Sarah: I am the Account Director on The Hundred experiential activation at CSM Live, manging the end-to-end delivery of the concourse fan experience.

What was your highlight from this year’s second edition of The Hundred?

Lewis: I enjoyed being involved in the full process from start to finish. A simple highlight for me was seeing the vivid colours and team branding coming to life from screen to print, when you start to see this in person it really starts to bring the tournament to life, especially in this summer’s sun!

Sarah: This is my first year working on The Hundred and the first time the competition has featured concourse activations. I enjoy seeing a project come to fruition, evolving from a concept to a physical experience people can engage with.

The highlight of The Hundred for me was seeing our activations bringing joy to the fans, enhancing their match day experience and hopefully inspiring the next generation. 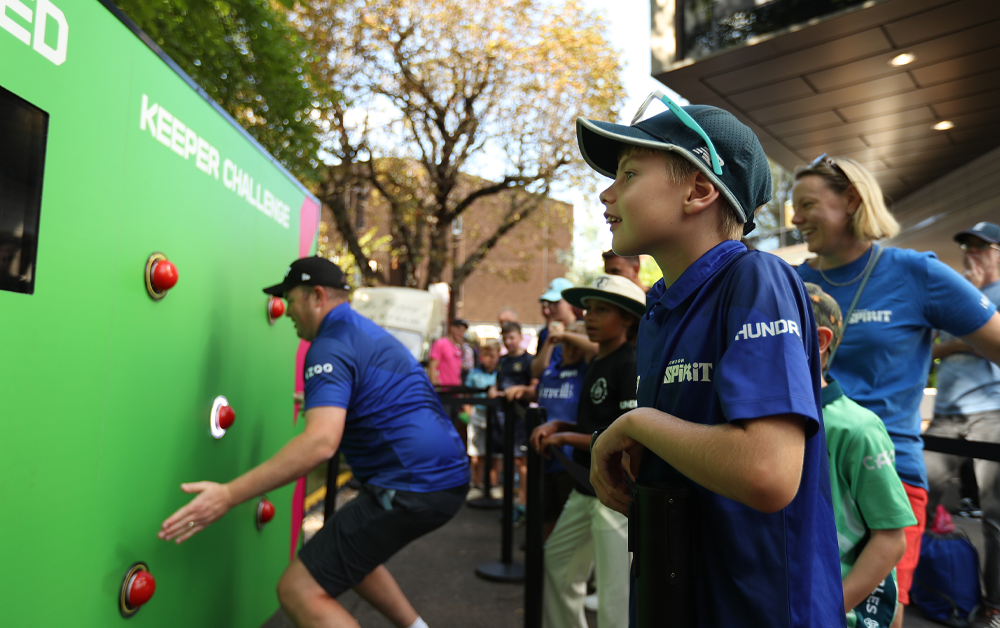 Can you explain the scope of work you delivered across all the venues at the tournament?

Lewis: A detailed scoping of all venues started way back at the end of the previous season, scoping for any changes to venues, proposed new sites and improved health and safety practices. We worked with the ECB throughout the season to confirm venue requirements, design tweaks and organisational changes with various stakeholders.

Sarah: We were responsible for designing, building, delivering and experience managing all the activations featured on the concourse at The Hundred. Put simply, it is our job to take a concept/render and bring it to life.

What challenges did you have to overcome working at the event?

Lewis: The rapid, fast paced nature of the event was a real challenge, especially with the inclusion of Test Matches thrown in at the same venues in the middle of the event. So we had to ensure that branding was switched over in a timely manner.

Sarah: The Hundred posed a unique challenge due to the relentless nature of the match schedule, 34 match days back-to-back over a four-week period. In addition to this, activating at eight venues across England and Wales all with their own nuances meant we had to constantly adapt our approach to fit with location specific requirements.

One major challenge that took us all a little by surprise this year was the weather. Being on an exposed concourse in 34 degree heat tested both our technology and our staffing to the max.

Which tournament venue was your favourite to work?

Lewis: I don’t think I can answer that! I like them all equally- ish.

Sarah: Each venue has its own quirks so I don’t think I could pick a favourite!

How do you think The Hundred has improved this year in comparison to last year’s successful first edition of the competition?

Lewis: I believe that fans have had a chance to associate with a team in the second year of the competition. With events coming back to normal and restrictions lifted, the inclusion of experiential and concourse activations has helped to bring in a better atmosphere to the venues.

Sarah: I am of course biased, but I believe the inclusion of the concourse activations enhances the fan experience and creates excitement beyond the game itself. The digital and physical takeaways also provide fans with a way to share and remember their day at The Hundred. 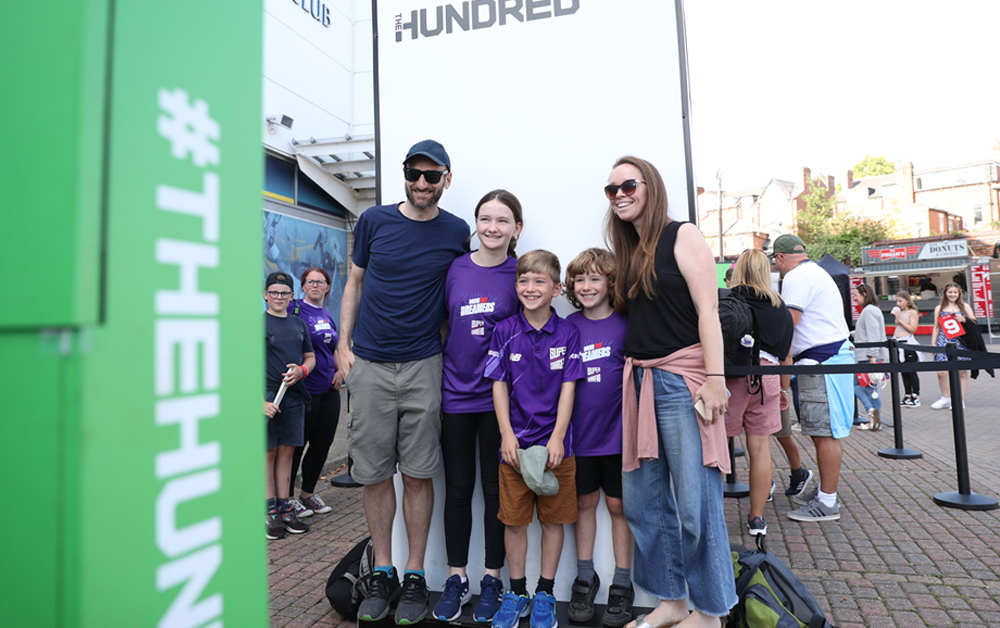 Did you have a favourite team you were cheering on throughout the tournament?

Lewis: Mainly London Spirit as it’s the venue I have spent most time at, but I enjoyed keeping an eye on all the teams progress throughout the tournament.

Sarah: I didn’t really have a favourite team, but I was pleased to see the two most consistent teams from the tournament lift the trophy.