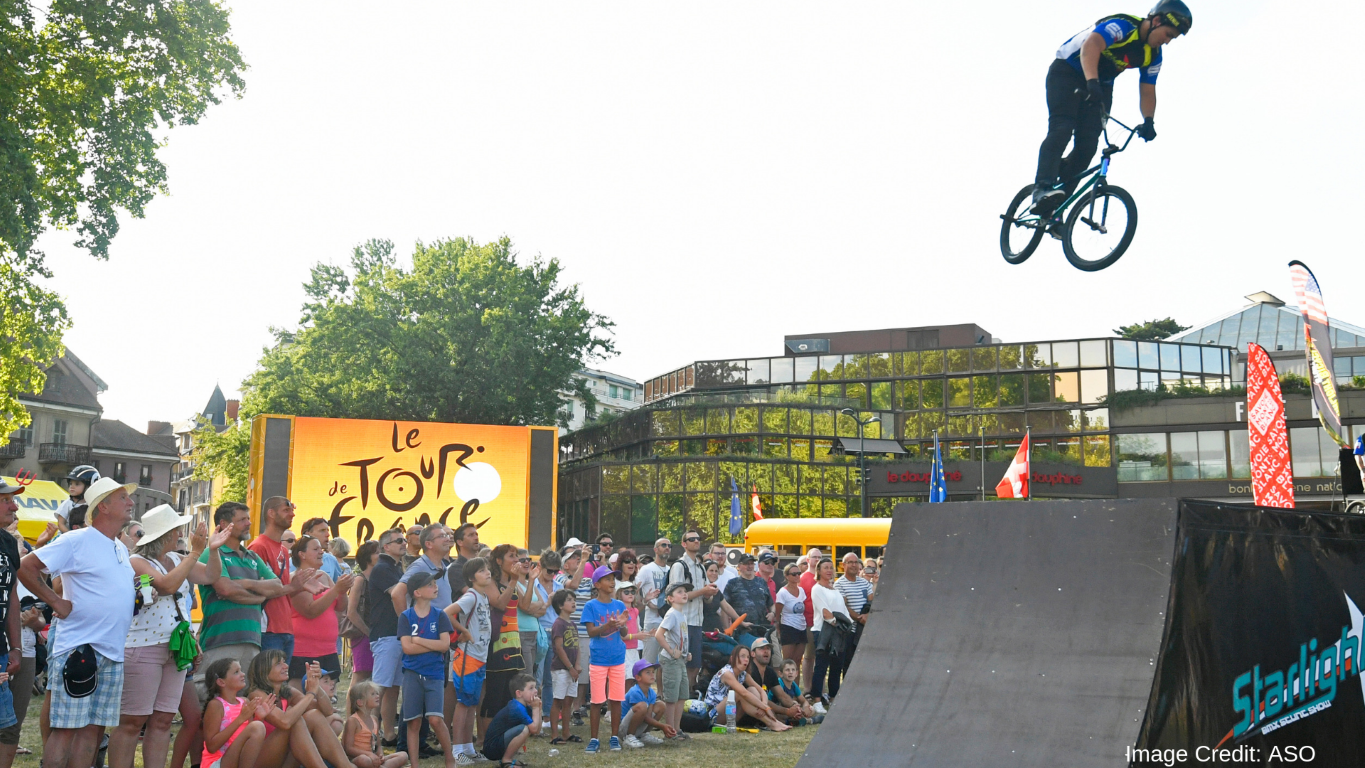 Sports fans rarely get a chance to get as close to the action as on mountain stages of the Tour de France, where cyclists strain every sinew within touching distance of spectators, who are often forced to part for the rider by the event’s security staff rider just a few feet in front.

For sports such as road cycling though, where the vast majority of spectators will only experience the live race for a fleeting few seconds when the peloton passes by, organisers can face a challenge to maintain engagement.

Tour organiser Amaury Sport Organisation (ASO) believes it has found a solution, with a series of strategically-located ‘Fan Parks’ situated along the route.

Over recent years, ASO has settled on a format of three official fan parks that sprout up when the riders pass through a location – and this year is no different.

Brussels, the 2019 Grand Départ host, staged a fan park in the city centre’s Place de Brouckère over four days, beginning last Thursday to coincide with the team presentations in the city – an event that attracted a crowd of 75,000. On Sunday, the final day of the Fan Park in Brussels, some 500,000 spectators turned up for the time trial stage.

The two other fan parks will be hosted in Albi’s Place Lapérouse from July 15 to 17 and then Nîmes’ Esplanade Charles de Gaulle from July 21 to 23, with each three-day gathering sandwiching the only two rest days in the race.

Each site will have a giant screen to follow the race live, as well as an entertainment podium, BMX demonstrations, a Tour exhibit and a bicycle ‘merry-go-round’.

Various cycling-related activities range from commentator booths to souvenir kiosks, coffee bars, virtual reality viewing areas and bicycle simulators where members of the public can try out some of the Tour’s most famous stages. Attendees will also have the chance to win prizes, while local associations will be on hand to offer guidance to budding cyclists.

The Ateliers du Tour workshops, which will offer children a variety of attractions, will be available across the three fan parks and also in Pau’s Place de Verdun on July 19.

Meanwhile, youngsters will be able to learn more about how to ride a bicycle safely on a beginners’ track for children aged between two and 14, as well as check out a repair workshop, offering advice about wheel-changing and maintenance, as well as Tour-themed drawing contests and other games.

For one of ASO’s other major cycling events, La Vuelta a España, the third edition of La eTapa, a gastronomic competition, opened at the start of July. Members of the public are invited to devise a tapa recipe that can be prepared in less than 10 minutes with no more than five ingredients from a list of 15.

Fans of La Vuelta will vote for three shortlisted tapas before the race directors select the winner, who will be treated to a VIP experience at one of the event’s stages, where his or her dish will be served. Candidates have until July 24 to enter the competition, with the winning tapa announced on July 29, just less than a month before the start of La Vuelta on August 24.

Additionally, ASO recently extended a deal with technology services provider NTT that covers a variety of augmented reality features and machine learning, all with the aim of enhancing the fan experience on-site, at home and on the move.

Intriguingly, in the future, NTT and ASO are looking to develop connected services for spectators on the road under the ‘Smart Outdoor Stadium’ umbrella.

“NTT’s real-time analytics platform and our co-developed ‘content factory’ allows us to produce around 2,000 exclusive pieces of content every year to be broadcast on all types of screens. New additions to add extra colour to the tour have also been incorporated including graphical charts, 3D mapping and even an interactive palette.”

This exclusive interview is part of “Fan XP” – a newsletter designed to keep you abreast of the latest innovations, strategies and more regarding fan experience across the globe. To sign up, please click here.