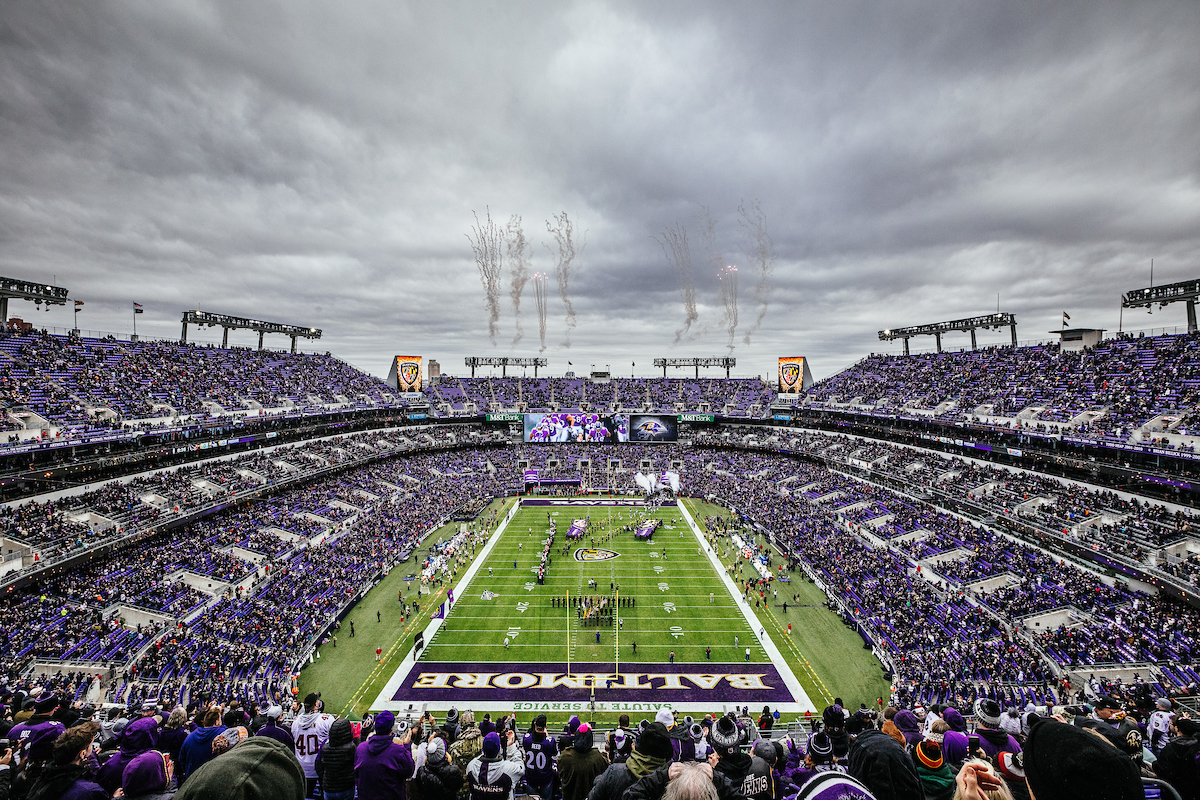 Inspired by the performances of mercurial quarterback Lamar Jackson, fans of the high-flying Baltimore Ravens have learnt to expect the unexpected this season. But even they were surprised by a new fan experience venture rolled out by the NFL franchise at M&T Bank Stadium last month.

The 42-21 Thursday Night Football victory over the New York Jets on December 12 debuted a ‘mixed-reality’ innovation as the Ravens wrapped up the AFC North title.

The new feature allowed fans at the game to view animations of a giant raven within the stadium in real time when they looked at the jumbotron and in-stadium TVs.

Ravens Productions worked on the feature for months in collaboration with The Famous Group, based in California.

Parts of the stadium were captured with a laser-scanning technique, with the stadium lighting analysed to ensure that when the raven flew it was accompanied by realistic shadows.

Along with the raven’s grand entrance, additional animations were created for defensive situations and celebratory plays during the game.

Having created the ‘wow’ factor, it came as little surprise to Jay O’Brien, vice-president of broadcasting and gameday entertainment at the Ravens, that the feature gained traction via social media.

“When we first revealed the raven, right before kick-off, we had a number of people from our team in the seating bowl, so we could receive feedback on fan reaction. As soon as the bird flew, the feedback we received was that the fans wanted to see it again. There was a ‘what just happened?’ type of excitement in the stadium.

“We had different motions that the raven could make throughout the stadium, so we ended up revealing the bird nine times during the game.”

Several mixed reality sports initiatives have hit the headlines of late, including the decision of Argentine Superliga football club Estudiantes to unveil a huge holographic lion as part of celebrations for its return to its renovated Estadio Jorge Luis Hirschi home ground in November.

However, the Ravens were inspired by the decision of Korean KBO League baseball team SK Wyverns to mark the opening of its 2019 season by introducing a giant fire-breathing dragon to its ballpark.

Looking to the future, O’Brien says: “For us, the challenge is where do we go from here? We refresh our stadium show every game with new videos, graphics and animations. The mixed reality tech is a challenge to refresh every game, because it’s complicated in the level of detail, production and animation.

“For the Jets production we had 15 additional people added to our normal gameday crew in our control room. If we bring the raven back and it retains the same flight patterns and animations, it’ll get stale just like any of our other video content.”

The virtual raven was only the latest step in the franchise’s ongoing fan experience efforts at M&T Bank Stadium though.

“Our organisation has always had a tremendous focus on the fan experience in-stadium,” O’Brien explains.

“We have a game entertainment committee which encompasses leaders from every department within the organisation, including our team president, and we huddle up throughout the season before each game and in the off-season. We challenge ourselves to continue to innovate and bring new technology and executions into the gameday experience.

“In the past couple of years, we were the first team in the NFL to have full 360-degree replays and this is our third season in partnership with SkyCam.”

The final phase of a $120m renovation project was completed at M&T Bank Stadium in July, with improvements including 4K ultra-high definition video displays, escalators and elevators to the upper deck, a new sound system, upgraded kitchen facilities, a redesigned club level and updated suites.

“I felt that, before the renovations, our video boards, in terms of their quality and size, were among the best in the NFL,” O’Brien says. “To then double our video board size and add four new boards at the top of the stadium, which provide stats and information, has added so much more excitement.

“Our advantage from the video side is that the boards’ locations, being on each side of the stadium and as low as they are, really create an incredible viewing experience. When you add that our video boards which, to my knowledge, have the tightest pixel pitch in the NFL, the clarity is unbelievable.

“We deliver more replays than game broadcasts, and all the executions during commercial breaks are things we work hard on.”

The Ravens place great importance on studying and developing the latest innovations in both the NFL and further afield.

“We’re always looking at what other leagues and teams are doing,” O’Brien says. “What works in a certain market may not work for us, but there’s always something to learn. It can be something as simple as a song that really works and brings energy to the fans.

“I would encourage teams to have a litmus test for every execution during a game. For us, we always ask: is this going to entertain or inform our fans in some way? That sounds simple, but if it doesn’t check those boxes then it’s just not worth it.

“The challenge for sports teams and leagues is that the entertainment marketplace is more competitive than it’s ever been. People can easily sit at home and be on their phone, with their HD television, and the quality of broadcast is only going to improve as well, with 4K, HDR and enhances in sound.

“We need to keep up, and that’s where these stadium improvements come from. We need to create an experience for our fans that’s so far above the at-home experience or doing something else with your time.

“That’s the opportunity that we look at every off-season – how do we make our game experience, from the moment our fans leave their house to when they arrive home – so phenomenal that they keep coming back, creating that home-field advantage.”

This exclusive insight into Baltimore Ravens’ mixed reality feature is part of Fan XP- a newsletter designed to keep you abreast of the latest innovations, strategies and more regarding fan experience across the globe. To sign up, please click here.