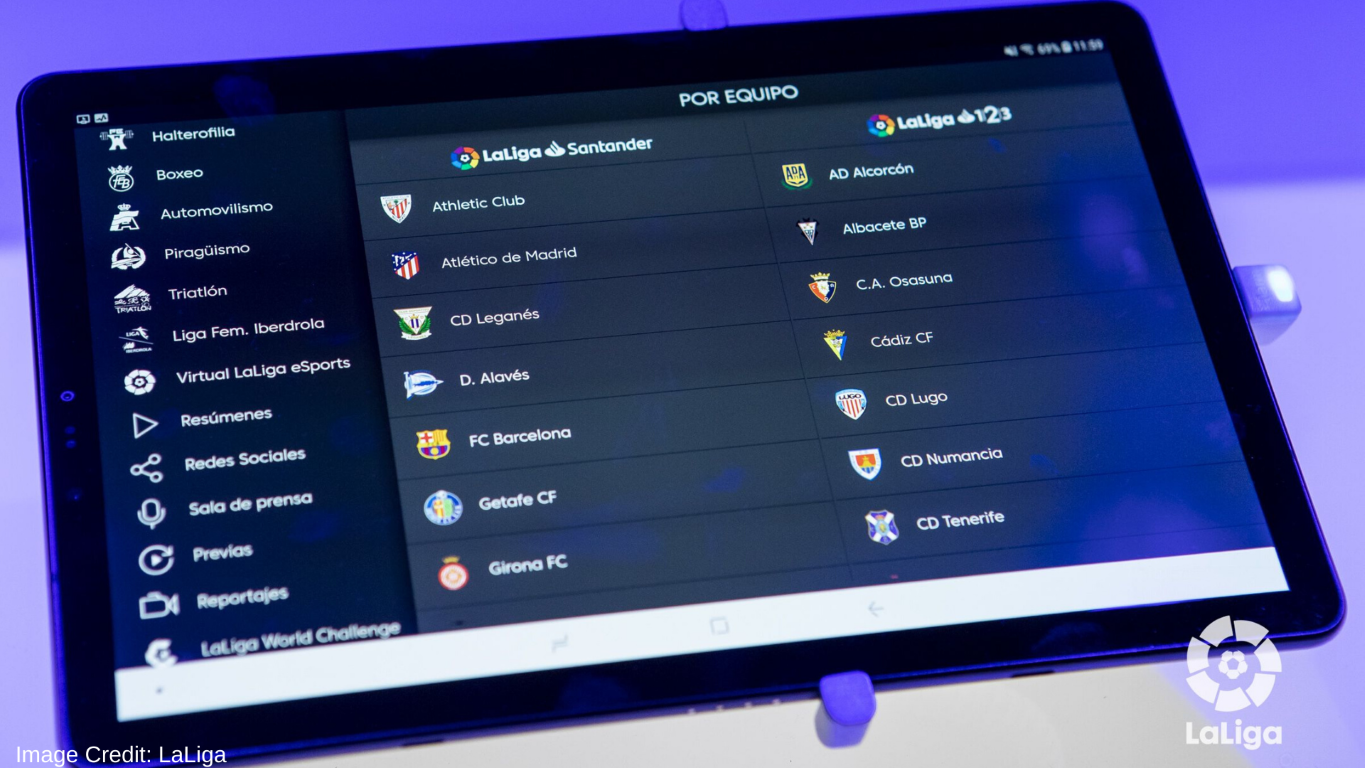 Artificial intelligence (AI) is being harnessed by LaLiga across a range of innovative platforms and devices, helping the Spanish football league to focus on enhancing the fan experience for supporters at stadia and further afield.

LaLiga has been one of the most proactive sports organisations in terms of fan engagement, with the establishment of the LaLiga Global Network two years ago giving regional representatives the opportunity to explore opportunities to connect with football followers across the world.

However, LaLiga’s efforts to engage with supporters do not always involve direct communication. This year, LaLiga is launching a new app that will provide players with exclusive personalised pre- and post-game information and pictures, which they can then share on social media.

In addition, a partnership featuring start-up Solos and top-tier club Real Sociedad has led to a pilot project featuring ‘smart’ tags being incorporated within official clothing and merchandise. Aside from ensuring the products are authorised for sale, the tags also offer premium experiences and content to customers who scan them.

AI, underpinned by sound data analysis, is also a vital tool in the development of LaLiga’s over-the-top (OTT) streaming service, LaLigaSportsTV, which features action from dozens of other Spanish sports associations, building a collaborative approach to engaging existing and new fans.

LaLigaSportsTV launched a year ago and has since amassed more than 600,000 downloads. However, the OTT platform is not simply about providing additional programming for content-hungry fans; it is about enabling LaLiga to better understand the behaviours of their followers.

“We saw that mobile technology was becoming central to the user experience and was defining company strategy,” Loreto Quintero, LaLiga’s strategic projects lead, tells us. “Most importantly, capturing and understanding data was essential to the future of business.

“Through an OTT operation, we realised we would be able to offer users an experience that catered to their preference for on-demand, mobile-ready content, while providing a world of relevant data that can help us get closer to fans. Knowing which sports the user is watching, how long they watch for and from what device, is vital insight for rights holders.

“Many people believe that the world of OTT is streaming… but it is much more. The key to the OTT is the knowledge of your user and how he consumes your product. Netflix has proven it. The example is the recommendation of films that it makes thanks to artificial intelligence. We have already learned a lot from that, which is informing our data-driven marketing.”

LaLiga clubs have also been keen to develop their mobile-first offerings to boost the fan experience at stadia.

In recent days, Valencia CF has launched an app allowing spectators at the Mestalla stadium to order food, drink and merchandise without leaving their seat. Alternatively, they can also pre-order items to pick up at various points throughout the venue, cutting down queueing times and reducing costs for the club whilst making life easier for visitors.

Similar options are now also available at RCDE Stadium, the home of RCD Espanyol, after the club struck a deal with CaixaBank to introduce cashless technology at the venue.

Espanyol’s marketing and retail director, Agustín Filomeno, said that the new technology would improve efficiencies on matchdays and also allow fans to do “anything they like, from checking match information to… enabling them to access the ground with their mobile or, if they can’t make it, transfer their ticket to another fan in just a couple of clicks”.

Meanwhile a new fan experience will be introduced at Camp Nou, the home of Espanyol’s local rival, FC Barcelona, with the atmosphere of the city’s famous Rambla street replicated at the stadium.

The Access 9 entrance to the Camp Nou will be converted in the coming months to La Rambla del Barça, featuring numerous Catalan food and drink outlets, as well as supplementary entertainment.

The project is part of the much larger Espai Barça masterplan at the stadium, which will transform the fan experience as part of a complete revamp of the famous venue, symbolising the type of customer-facing innovation that is increasingly common across Spanish football.

This exclusive insight into use of AI to enhance fan experience at LaLiga is part of Fan XP- a newsletter designed to keep you abreast of the latest innovations, strategies and more regarding fan experience across the globe. To sign up, please click here.